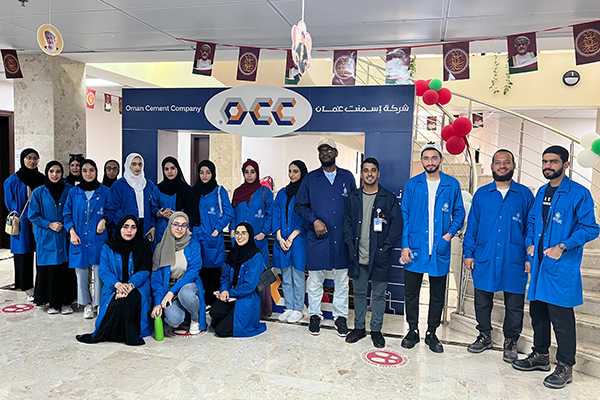 Oman Cement Company SAOG (OCC) was established in the year 1978 as part of the renaissance initiated by His Majesty Sultan Qaboos bin Said. Cement plant with a clinker capacity of 600,000 MTS per annum was commissioned in 1983 and subsequently due to increase demand for the cement in the region, plant capacity was expanded to 1.2 Million tons per annum in the year 1998, which enabled OCC to produce 1.26 Million tons of cement. In 2006, Company has installed a Cement Grinding Mill with a capacity of 3000 MTS per day. Further installation of third clinker line to increase the clinker production capacity from 1.2 Million MTS to 2.4 Million MTS per annum has been commissioned during year 2011.

In the beginning of this visit Mr.Hilal Al Amri – Head of Training department gave our students the general idea about cement and the main four raw materials used in manufacturing cement in OCC are Limestone ( Ca0 ) 85%, QPH ( SiO2 ) 8%, Kaolin ( AI203 ) 4%, Iron Ore ( Fe203 ) 3%. And he explained the full cement production line unit steps start from Quarry to the end Laboratory, after that we taken a tour in the plant by bus to see the production line where there are five crushers hammer, titan, mobile, additive and meso which have crushing system depend on materials properties.