Applied Sciences Department-Presentation of Various Strategies on The Preparation of Evidences for Quality Audits by Dr. Maximo Roger A. Pua 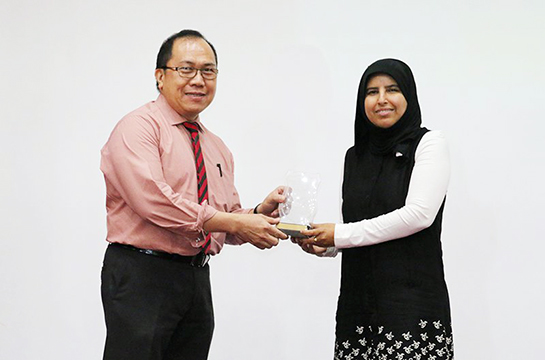 Education is a powerful tool that can be used in building a student’s personality with specific and desired positive traits (i.e. behaviors) that are crucial for the development of any nation. According to psychology, “cardinal traits” are few acquired traits by which the total personality of a person can identified after the famous psychologist late. Gordon Allport. Experienced educators will initially start the personality building in individuals by creating certain situations or specific circumstances in which the learner is forced to exhibit the desired traits only on a temporary basis (called as secondary traits) on yielding to the pressure that was purposefully created. These secondary traits last only for a short period, for example during assessments. Repeated boost of secondary traits created by strategic planning lead to development of certain intermediate general characteristics (called as central traits) that will form the basic foundations of personality. The objective behind “INSTITUTIONALIZED LEARNING” is to facilitate the teacher to make his/her students to finally acquire the “CARDINAL TRAITS” by making them to evolve in the educational system through a systematic journey by acquiring the “SECONDARY TRAITS” and “CENTRAL TRAITS” in succession, which can always be realized through the prevailing scaffolding called as “EDUCATIONAL FRAME WORK”.

The cardinal traits that are finally to be achieved by the students after their graduation are defined in the policy of academic institutions as the “GRADUATE ATTRIBUTES”. The interplay between the knowledge provider “i.e. THE ACADEMICIAN” and the knowledge receiver “i.e. THE STUDENT” must be moderated by “THE ACADEMIC ADMINISTRATOR’ with certain policies and check points. In order to bring the seriousness among these three highly onerous roles and the role players by creating a sense of mutual trust, belongingness and team spirit, by securing that no one dominates the other and by ensuring that always there is a fair play, a procedure called as “QUALITY CONTROL” is introduced into the educational systems.

Understanding the total philosophy of the quality assurance and quality control, the think tanks at the department of the applied sciences presently headed by the HoD, Dr. Samiya Al-Jaaidi continued an administrative role that was initially created and named as the QA Coordinator by her predecessor. The present QA Coordinator of the department, Dr. Maximo Roger A. Pua, who has been closely associated with the quality assurance affairs either at the department or at the college level, for almost eight years had acted as the Chairman for the APS- QA Meeting in the AY 2015-16 with the DC Council, the departmental committees and the coordinators that was conducted on  Monday, the 21st of December 2015 from 9:00 - 10:30 AM in the seminar room (M-316) at the department of applied sciences.

Dr. Maximo was very systematic in his presentation of the following items:

The HoD of the department of applied sciences, Dr. Samiya Al-Jaaidi was strategic in training the staff of the department of applied sciences, very systematically on the QA matters through the three intensive training sessions, spanning two hours each by the QA guru Dr. Maximo Roger A. Pua in the previous academic year  (http://www.hct.edu.om/about/the-college/news-archive/sessions-on-quality-assurance-matters). The quality assurance is now a team work at the department of applied sciences with at least one member from each of the four academic sections. The output of all these efforts of the departmental council headed by Dr. Samiya and supported by Dr. Maximo and his team are evident through the quality of the “SELF ASSESSMENT REPORTS AND OPERATIONAL PLANS FROM THE AY 2011-12 ONWARDS” at the web-link (http://www.hct.edu.om/academic-departments/applied-sciences/quality-assurance ). The QA team conducted rigorous academic audits in a well-planned and phased manner during the AY 2014-15 and AY 2015-16, instilling a confidence in every staff member of the department to face the audits. In total the vibrant QA team with a willingness to study and comprehend the ever expanding quality control procedures is established at the department.

Appreciating the selfless and dedicated work of Dr. Maximo Roger A. Pua and his team in helping the department to produce the high quality outputs, on behalf of everyone at the department, Dr. Samiya Al-Jaaidi presented him with a special token of appreciation during the staff appraisal awards of the previous academic year (http://www.hct.edu.om/about/the-college/news-archive/department-of-applied-sciences-celebrates-the-staff-appraisal-awards).

The testimony of the success of quality assurance is reflected through the scrupulous implementation of the reasonable suggestions and findings that emanated from the feedback of the students and the staff. For example, almost all the laboratories are refurbished with up to date instrumentations and almost every class room that is controlled by the department is provided with a computer and a LCD projector. A seminar room is created. Hoping many more changes and material benefits to the department, the staffs are always in a continuous and progressive intellectual journey benefitting the Omani students at every juncture.

Share this:
Copyright © 2022 | University of Technology and Applied Sciences - Muscat